In My Life
All These Places Have a Meaning… 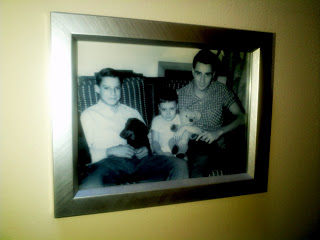 The single dominant memory that I have of Alan Oscar (pictured above on the right) is of him sitting next to my bed, where I was confined with measles. He was my friend and neighbor in Court Royal, an airy old apartment house in Christ Church Lane in Bombay’s Byculla Bridge. It was the 1950s and our neighborhood was the happening place: gorgeous dames, strutting guys, great music, a mind-blowing diversity of middle-class cultures and above all, the green lung of Christ Church School, complete with trees, parks and a variety of birds from parrots on down.

Alan sat with me through my measles attack and made my convalescence bearable. For a lad of not even 10 summers, there could be no heavier sentence than to stay at home while his friends ran riot in the building and around the Lane, playing carefree, pre-teen games. Alan is six years older and was at the time a TEENAGER!  He became my lifeline as I tossed and itched in bed; the wise, mature, compassionate guy among our tight knot of friends in the Lane.

A tsunami of nostalgia whisked me back when Alan and I re-established contact and he sent me this picture. Christ Church Lane was a defining phase in my life after I left the rarefied precincts of Juhu Beach and plunged headlong into bustling, vivacious Bombay’s 8th arrondisement, Byculla Bridge. A celebration of India’s middle class diversity, Nehruvian-style, this wondrous place was the hope that all of India would burgeon to embrace different cultures and lifestyles with strong middle-class values of work and civic pride.

Within days of leaving the Lane, I realized most of the rest of India was not like it nor headed in that direction. It also became apparent that cosmopolitan Bombay itself was slowly being transformed into the hapless Mumbai about that time.

Ah…but that’s another story. Staying with life in the Lane is immensely more interesting because it is about relationships in youth between the unlikeliest of people. That these can be revived a full half-century later is a story that began for me in the mid-1980s when I had my high-school friends (St Xavier’s Bombay, Class of 1965) over to dinner at our house in Oak Park, an old, gracious suburb just west of Chicago.

My friends showed up on a hot July evening; many of them I knew since the fifth grade. The reunion turned out to be good fun but I have never met them again. And that’s largely because I didn’t keep up with them. Having had a taste for nostalgic reunion, when I next went to London, I tracked down my friend Aasif; hadn’t seen him since 1973. So nearly a decade later, I caught up with him. We remain the same good friends to this day: he lives in Goa and we meet every other month.

Having never been to Delhi, in 1981, on my first trip, I looked up Anurag Chowfla, a friend from my days at the Maharaja Sayajirao University of Baroda. In an amazing twist of fate, Anurag is now, family: my daughter married his nephew. Over the years, I also looked up Mark Warner, with whom Anurag and I shared the Shakespeare Society experience in Baroda.

In the same vein, I attended a much larger reunion of the St Xavier’s class of 1965 in January 2008. There I met, among others, my friend Lawrie Ferrao, whom I have known since the fifth grade. He is now Fr Lawrie, SJ and head of the Xavier Institute of Communications. We got along smoothly all over again and he agreed to bless my daughter’s wedding at our village church in Goa the following November.

Over the years, I sought out old friends and re-established contact that I still maintain. Every now and then, I hang out with another Baroda friend, Yogi Motwane, with whom I reconnected in the US…and other friends from the MSU engineering school. Last November, we had a  reunion that attracted other friends from afar: Venky Krishnakumar from Singapore and Harry (Harish) Chopra from Perth. Renewing ties is fun and while it’s not like we meet every day, if I’m in Bombay, Singapore, Perth or New York I will make sure to call them and at least have dinner and a few drinks. Main thing is we are friends all over again.

In my search for old friends, my Eureka moment was when Victor Rodrigues, Bombay’s celebrity dentist, emailed me after he read a column I wrote in DNA. Victor, like Alan, was one of my idols at Court Royal in the Lane. He did this Elvis hair and sang rock ’n’ roll with abandon; his “Hard Headed Woman” still haunts my memory.

Funny though: both Alan and Victor had younger brothers, who were actually my friends. But the older guys became heroes for me because they were TEENAGERS! They had absolutely no need, according to the serious senior-junior hierarchy of those days, to engage with a pre-teen, vegetarian, Gujarati sod.

Nostalgia is a theme that Homer has written about with passionate, poetic elegance; Milan Kundera did a modern prosaic version. Mine is merely a journalistic report that rambles through the 20th and 21st century. There is an echo of Homer in my experiences, though. Despite the allures of Circe and the Sirens, I left America to come back to India; and I had hoped to find the olive tree just as I had left it: older but fecund; familiar but new; and always a defining feature.

Alas, just this morning I received a message from Shawn Fleming Rodrigues, Victor’s younger brother, who has lived in Court Royal forever…he is a friend of my brother, who turned 60 this year. “Byculla has changed so drastically and regrettably not for the better, that I feel that the old Byculla was my past life and this is a reincarnation,” he said.

Everywhere, they honor days gone by with respect and a touch of nostalgia. Court Royal and Christ Church Lane could have been treasured and conserved as a wonderful example of middle class values and lifestyles rooted in cultural diversity.

India seems to kill the past with its brutish reality!
Posted by Rajiv N Desai at 3:33 PM No comments: