The Anxiety of Freedom

Panjim: The beginning is mundane. You arrive at a jetty on this capital city’s iconic waterfront, tumble out of the car, make an awkward climb to a floating jetty and jump into the boat. After that, it is a liberating experience. 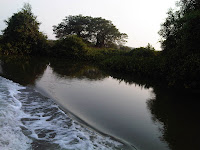 Within minutes, the speedboat set off to explore the Mandovi River and its backwaters. We flitted in and out of waterways and their littorals, the mangroves that seemed to eat into the river as our boat maneuvered past overhanging branches through the twisting, winding backwaters. A calm descended on us; the outside word ceased to exist.

For a fleeting moment of schadenfreude, we thought about friends in Delhi and Bombay, stuck in traffic jams and all manner of urban discomfiture. As we floated through the backwaters, it seemed to me we had chanced upon an undiscovered world. And as we emerged from this mysterious water world back into the mainstream, we were confronted by sweeping vistas on offer by the mighty Mandovi.

Rivers play an important role in the life of India. They are considered sacred but modern India treats them as sewers, dumping waste and poisons in them. Most rivers in India are dirty and dying. The Mandovi is, in stark contrast, clean and is used for commerce and transport. Now, it is being increasingly used for pleasure. 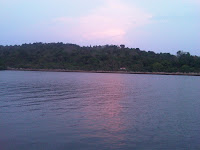 And so it was for pleasure that we found ourselves rolling on the river. With the wind upon our faces and wonder in our eyes, we floated in the waters and saw a Goa that is mind-boggling; away from the beaches and the tourist spots. Time stood still here and the two hours stretched to an eternity.

The Mandovi tidal basin is an intricate system of wetlands, marshes and paddy fields, intersected by canals, dykes, bays, lagoons and creeks. The river and the backwaters are governed by regular tides that reach up to 20 miles upstream.

Our two-hour long experience on the Mandovi filled us with reverence for the majesty of nature. The river seems eternal; I use the word “seems” because it is impossible to grasp and define eternity in terms of years, centuries or millennia. And understanding this, the use of “seems,” puts you face to face with spirituality and its temporal offshoots: faith and communion.

Herman Hesse in his book Siddhartha wrote about “the restless departures and the search for stillness at home; the diversity of experience and the harmony of a unifying spirit; the security of religious dogma and the anxiety of freedom." 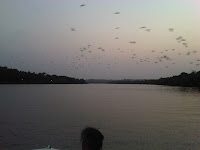 Over the years, I have come to celebrate diversity, to value harmony. Now I am concerned about religion and its effect on, “the anxiety of freedom.” These imponderables have occupied my thoughts. I have often wondered, wouldn’t it be so much simpler to be a man of faith?

But where do you place your faith?

Of all the religions, I have always been intrigued by Catholicism and its celebration of faith and communion, week after week; generation after generation; across communities, nations and cultures. Each Sunday, believers go to church and reaffirm the dogma that Christ was born of Immaculate Conception; He was crucified and rose from the dead. This they call proclaiming the mystery of faith. They receive the wafer and wine believing them to be the body and blood of Jesus Christ, which they call the Holy Communion, the Eucharist, the thanksgiving.

That afternoon on the boat, contemplating the majesty of the river and its various branched waterways, I began to get a glimmer of the spirituality of faith and the mystery of communion.

And no, I have not found religion. I still remain firmly a skeptic. But that experience on the Mandovi will make me a tad slower to challenge matters of faith. Call it the anxiety of freedom. 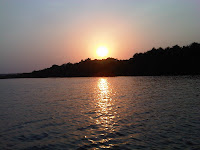 On our way back to the dock, we stopped midstream for a libation and a view of Panjim as the lights came on. It was a spectacular sight; the neat laidback city on the estuary came alive with its nocturnal personality. It was not Manhattan or Chicago but from the darkness enveloping the river, it was a sign of civilization. In the end, despite the majesty of nature, the lights of Panjim were comforting, a sign that in the end, civilization is what this world is about.

As we returned to shore, we were forced to contemplate mundane problems like where to have dinner. We settled on a restaurant in Candolim, the hip and happening place in north Goa. When we reached there, a solo singer was in attendance.

When we walked in, he launched into the Louis Armstrong 1968 classic vocal that celebrates nature, humanity, eternity: the wondrous mystery of life: What a wonderful world...yeah!