A mature response by the UPA government put an end to the disruption of Parliament led by the BJP. In a passionate statement, Pranab Mukherjee said, “I may be the most illiterate man in the House, but I fail to understand what purpose is served by dividing the House on a motion that seeks adjournment over black money in foreign banks. We have no conflict of interest on the issue.
We are with you on the need to curb the menace. So why have a division?”


Involving as it does international tax treaties and laws of privacy; extracting information on Indian holdings in foreign banks is difficult, the finance minister said. The Mukherjee speech rates, in my mind, among the better interventions in the 60-year history of Parliament.
Mr Mukherjee said there are enough laws on the books to deal with black money squirreled away in tax havens but they have not been effective. No banks will violate their secrecy code. Warming to his theme, he asserted that the BJP was in power for six years and had plenty of time to persuade foreign banks in tax havens to divulge their Indian secrets.
In his forceful speech, Mr Mukherjee implied that the BJP is not a serious player and simply obstructs Parliament with a view to showing the government does not enjoy majority support. In the event, the adjournment motion was soundly defeated, leaving the BJP with egg on its face.
The BJP’s assault on foreign holdings is meant to reinforce the canards they have spread for several decades that Congress leaders, especially the Gandhi family, have money stashed away abroad. It is of a piece with Anna Hazare not inviting the NCP’s Sharad Pawar to the muchhyped debate on the Lokpal Bill issue simply because they believe he is corrupt. Mr Pawar is the leader of a major political party that has a sizeable presence both in Parliament and in the state assembly. It has ministers in the Union Cabinet and in the state government.
Two decades ago, V P Singh played the same game. He campaigned in 1989 with a piece of paper saying he had the Swiss bank account numbers of various Congress leaders and their friends. He promised he would reveal names once he was voted into power. It turned out that with the support of the BJP and the Left, he did become Prime Minister and all he did was to unleash the Mandal mayhem. If we must talk of public life and political leadership, you have only to look at Mahatma Gandhi, Indira Gandhi and Rajiv Gandhi, three tall leaders who were assassinated by fanatics. Then there is , who suffered the slings and arrows of the BJP propaganda machine for being Italian by birth; she stepped back when she was entitled to become the Prime Minister in 2004.


Since then, the BJP has pushed the line that Mrs Gandhi is the real power and Manmohan Singh is a mere puppet. The BJP leader, L K Advani, has been voluble in seeking to portray Dr Singh as a weak leader. I served on the Congress media committee for seven years and can say, having seen it at close hand, the relationship between Mrs Gandhi and Dr Singh was one of immense mutual respect.
The question needs to be asked: did Mr Advani, home minister in December 1999, display great strength and resolve when the government cravenly succumbed to the demands of the hijackers of Indian Airlines flight 814? Could the Congress have accused him of being weak? The answer is yes, but they did not. It was a matter of national security and the Congress lent its support.


The hijackers sought the release of three militants including Ahmed Omar Saeed Sheikh, a British-born terrorist with ties to al Qaeda, who was implicated in the murder of Daniel Pearl, a reporter for the Wall Street Journal.


The BJP had its chance from 1998 to 2004. It started out with nuclear explosions in May 1998 that altered the balance of power in the subcontinent negating the conventional edge that India enjoyed till then after Pakistan responded by staging its own nuclear tests. The curtains came down on BJP’s rule in 2004 when, turned off by an insensitive India Shining poll campaign, voters turned away.
Also, we must never forget the 13-day BJP government in 1996. That reckless act served to underline their lack of seriousness and their belief that being in government is about power and pelf, rather than service and sacrifice.


Fifteen years later, its obstructionism in Parliament confirms that the BJP is confused and desperate. Now, can we please get back to the business of governance? 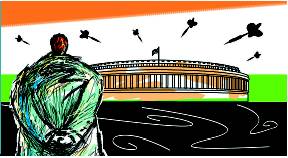 • The BJP’s actions are about self-interest, not seriousness on issues of national interest

• In 1996, the party displayed it puts power and pelf above service and sacrifice

• Now, its obstructionism in Parliament confirms the BJP is confused and desperate
This article appeared in The Economic Times on December 23, 2011.
Posted by Rajiv N Desai at 4:14 PM No comments: